Happy Saturday!  In light of the annoyingly cold Chicago “spring”, I’ve been sewing a lot of items which can be layered for the seasons.  Coming up tonight are the Grainline Studio Driftless and Penny Raglan! 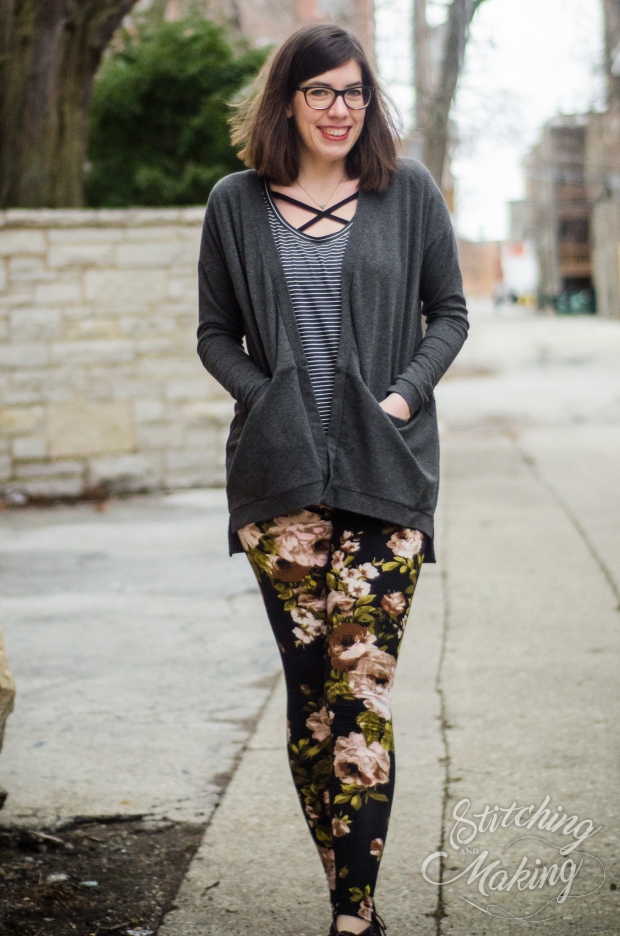 I’ve been obsessed with the Driftless since it was released around this time last year.  I’ve always liked wearing cardigans, but with long monkey arms I’ve never been able to buy one that was entirely comfortable.  So far, I’ve made four of these (the first two before I had this blog, so no real pictures yet).  It’s the perfect cardigan for layering, which is something I do all year round, working in a shiveringly cold office.  So that said, I knew I needed more, especially considering my first two were made with printed knits.  When you have a million pairs of printed leggings, you need some solids in your life!  Speaking of leggings, these are the ever-loved P4P Peglegs as per my usual.  And a small appearance of my black cropped Cross My Heart Cami! 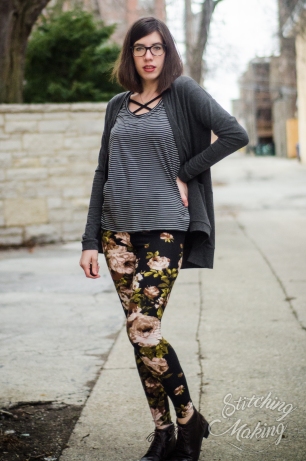 The reason I love this cardigan is because the excellent drafting creates such a great shape and lovely drape.  This heather gray one is made with a 10oz French Terry, which makes it pretty sturdy and stable.  It’s perfect.

I also really enjoy the pockets, which are placed right into the seam line, so you can’t see them from the outside.  They’re also secured on the inside with thread chains, meaning they don’t wiggle around too much like inseam pockets are apt to do.

I was super lazy and ended up attaching the neckband like a normal band, instead of hand stitching down the inside as directed (which I did for my first two).  I’m not terribly annoyed by it though because I now have a serger, so the finish is still clean.  Plus using black thread it is hardly noticeable when things flip out during wear.

I chose to make View B, like I always do, because I particularly like the look of the split hem.  I think it makes it look less “handmade”.  And I also prefer the longer band on the back, too.  Considering my frequent choice of leggings as pants… 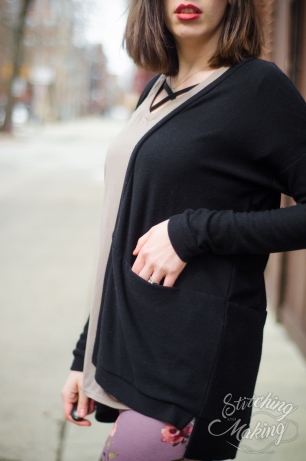 I also made another Driftless with the same options, this time using a super soft and flowy brushed black sweater knit.  I put the brushed side on the inside (technically I think that was the outside) because I wanted that but also because I knew it would pill like crazy.  It’s not the best fabric but it is certainly extremely comfortable and I’ve already worn it tons of times.  Black goes with everything and when it’s literally as soft as a bunny, I can’t resist!

And hey!  More Peglegs and the Cross My Heart Cami.  Also paired with a beige Mama Ava, but I’ll blog that outfit another time. 🙂 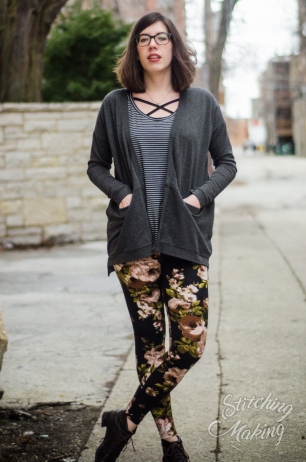 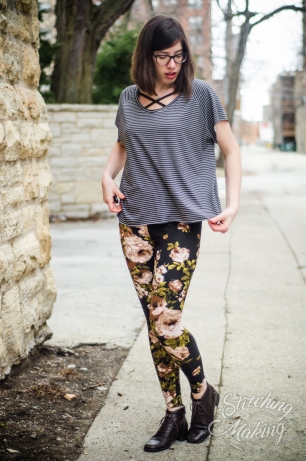 The Penny Raglan is another one of my favorites.  I believe this is also my fourth time making it, too.  Actually…wait, it’s my fifth.  It’s a crazy fast sew but so comfortable and easy to wear with pretty much anything.  This one is featuring a gray/white striped double brushed poly.  Talk about comfy.

The downside is the brushed poly isn’t quite as drapey as my usual choice for the Penny Raglan (rayon spandex).  But I think the soft factor makes up for it once it a while.

I was also lazy on this one and chose not to hem it…shhhhh, don’t tell.  I rarely ever do this because I hate things feeling unfinished.  I may go back and hem it actually, but I kind of like the unfinished look on this particular one and I know the stripes will make for an EXTRA FUN hemming time.  Also, I’m not quite sure I want it much shorter.  We’ll see…I always add about 1″ to the length due to my height, but I think I should have added just a touch more since it doesn’t hang down quite as much as rayon spandex.

Looking at these pictures now it’s clear I’m freezing.  Ha!  This was the last of three outfits I shot in the course of about 45 minutes and I was so over it.  My camera was too.

Anyway, hope you have having a great weekend!  Today is my birthday, so needless to say I did manage to sew a bit today too. 🙂