It’s that time again – for the surprise fabric box!  This month’s BeeBox comprised of 2 yards of Vinegar and Honey’s custom brushed poly.  Which I (not so) promptly used to make these leggings!

As somewhat “boring” as leggings are, I actually haven’t made a non-solid pair for myself in quite some time.  I went on a spree last year and this year I think I’ve probably only sewn maybe 2-3 for myself.  These are the updated P4P Peglegs, high waist option.  So I decided to be a rebel and use this to make bottoms!  The suggested pattern was a top and it seems most other people have used it that way as well. 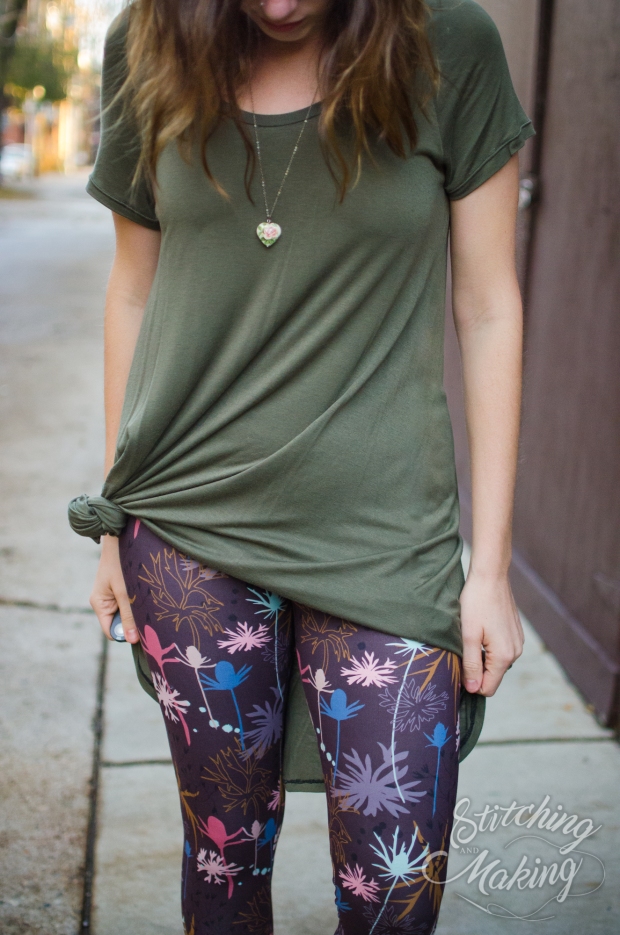 I decided to pair this with a Mama Nina, which I’ve shared here previously.  I took about 2-3″ off of the dress length when I sewed it, so it is slightly shorter than the usual dress length.

Going out on a limb, I decided to also knot it.  Confession: I’ve actually never worn a top knotted like this or any other way outside of the house (or I guess I mean this alley).  Somehow I feel like a poser and I don’t usually like the look.  But I wanted to show off the leggings a bit more here, and literally everyone ties knots on their shirts these days so…I had to give it a try.  Thoughts?  Comments?  Critiques?  Still not sure I could wear it for real.

But anyway, I love the olive with this fall print!  I don’t usually wear a lot of brown, mainly because I think I over-wore it when I was younger…but the nice splashes of jewel and earth tones here are nice.  Paired with the olive too, I think it looks really great!

Next month’s (technically, this month’s) BeeBox is the special anniversary box to celebrate their company anniversary.  I’m excited to see what it holds and also looking forward to more VHCO customs in the BeeBoxes!