I’m back with another maternity modified Fringe dress!  This one was actually what I had made first as my muslin for the Fringe dress I posted earlier.  But it turned out even better than I had hoped so I do wear it quite often. 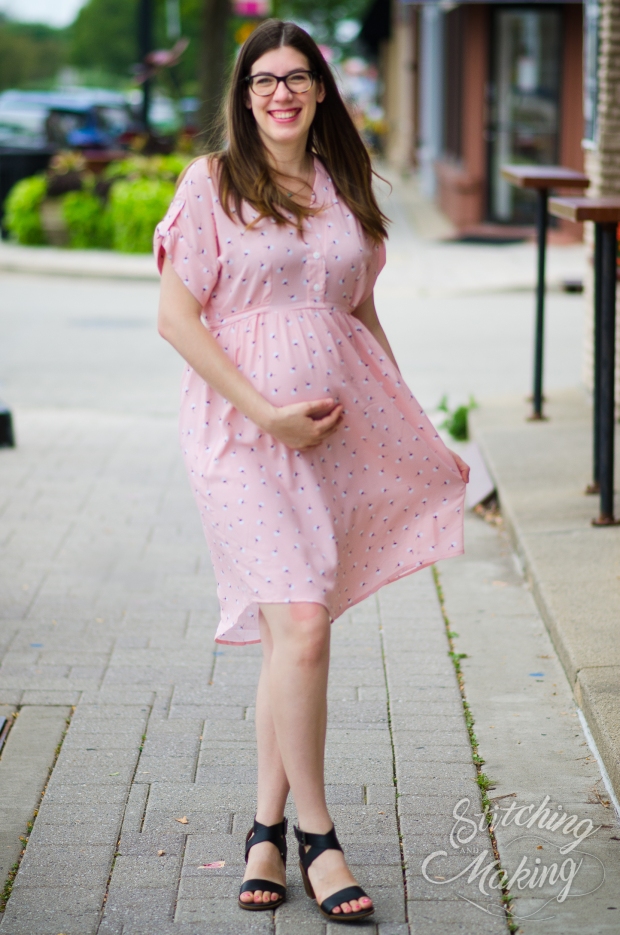 Like the other Fringe dress, this fabric is also rayon challis and part of the CLUB line from Raspberry Creek Fabrics.  I had intended to give it to someone but then decided I liked it too much!  The little cotton puff design is so cute.  So then it became this dress instead.

The maternity modification I did is the same as what I outlined in my previous post.  It’s so easy and 100% wearable post-pregnancy as well.  Even better, it is nursing friendly with the button placket.  So a win-win-win!  The actual construction goes together fairly quickly (especially for those who are not big fans of button plackets because this one is just a half placket). 😉

I did opt for the back ties on these because I think it helps bring a little more definition to the empire waistline, considering the original pattern is supposed to land at the waist.  The ties are also included as part of the pattern as well, but they are optional.  For more of my thoughts on this pattern in general and how I modified it, check out my first post.

I would normally have more pictures for a blog post, but my camera/memory card decided to go crazy and corrupted half of the pictures we took!  Luckily these get the point across, just maybe not as thorough as I would normally be.  Oh well – I’ve since trashed that memory card!

🌊 🌲
Summer in Oregon ☀️🍓
Looking at my feed made me realize I hadn’t posted here in over a year! But really I don’t expect anyone to see this because I know Instagram hates posts. 🤷🏻‍♀️ But in that timespan I grew and birthed another baby boy, we moved to the Pacific Northwest and I hardly sewed anything. 😂 This linen faux-romper (fauxmper?) is one of my favorite makes though and it’s perfect for hot weather and staying cool. Anyway, just posting to say hi. I’m hoping maybe the dead rodent in the wall of my craft room will decompose ASAP so that I can enter the room without being nauseated. No big deal. What is with my sewing space and rodents?!??? 😭😭😭
This boy is definitely a snuggly one these days! He was always so squirmy and unsettled as a baby, it’s still surprising when he is like this now.
It’s been a while, but hopefully my “sewjo” has returned for the time being. The past few months have been very rough for a few reasons but...sewing is at the top of my self care list and so I’m trying to make it a priority! Easier said than done.
We painted our porch a neutral color after ripping out the carpet, and I realized I accidentally made myself a great photo “studio”. 👏🏻🤷🏻‍♀️